The Queen’s Diamond Jubilee in 2012 was the catalyst for a number of like-minded people to think about how the River Thames and rowing could be harnessed for the celebrations, echoing the great Royal river occasions and pageants of the past. This led to Lord Sterling’s initiative to build an elegant rowbarge that would be both large enough to have visual impact on the Thames and more significantly be a lasting legacy of the Jubilee.

The team working with Lord Sterling on the project consisted of naval architects Stuart Roy and Ed Burnett, project manager Damian Byrne, and master boatbuilder Mark Edwards, one of the country’s foremost builders of traditional wooden boats. These traditions have their origin in Viking boat construction and subsequently the design and build of Royal and state rowbarges of the 17th and 18th Centuries.

The project team worked closely with the Maritime and Coastguard Agency and Lloyds’ Register for nearly six months to finalise the design. Their expert advice and support regarding the safety and seaworthiness of the finished vessel was invaluable. A great amount of research was also carried out by Simon Stephens, a curator at the National Maritime Museum, into the design, operational and social use of these great barges during their history.

Mark Edwards assembled a highly-skilled team of craftsmen to build the hull and the coach in what was then a secret location in Brentford and then moved to Isleworth, West London, where she was launched in April 2012.  Nothing of this nature or on this scale had been undertaken for more than 200 years. Moreover, the build had to be accomplished in a very short period of time. 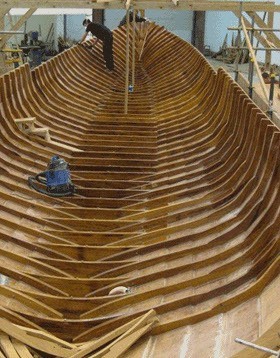 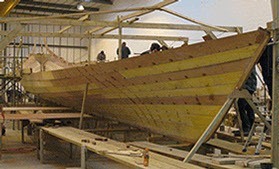 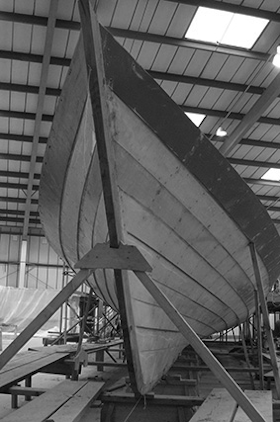 In just 48 hours Cushman and Wakefield identified an ideal industrial unit owned by Segro who most generously provided the space in which the rowbarge was built at no cost.  British Telecom set up communications for the site in under 24 hours.  Gloriana was built in less than 19 weeks by a team of over 60 craftsmen including young people from the Prince’s Trust who worked on the project for experience and training.

Commenting on the project, five-time Olympic rowing champion Sir Steve Redgrave said, “I visited the yard where the rowbarge is being constructed, and was captivated not just by the beautiful lines of this magnificent vessel, but by the infectious energy and enthusiasm of the young team working to build it. Speaking for myself, I can’t wait to have a go at rowing it!”

Additional support for the project was widespread, but special thanks are due to David Crosswell of Polygon Scenery Ltd who sculpted the baroque decorations, Peter Hare of Hare & Humphreys who together with Christine Palmer of Calvers & Gilders applied the gilding. Other members of Hare & Humphreys undertook the major part of the artistic painting and decoration of the superstructure and interior of the coach. Working with Kate Woods of Woods Silver Fleet, the soft furnishings were made by Watts 1874 and The Rug Company provided the hand-made carpet for the coach. The elegant oars were made by Sutton and the blades were decorated by Hare & Humphreys. 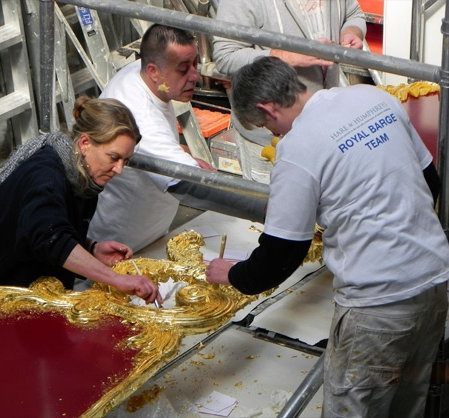 Throughout Brunswick Group has handled the media and public relations, notably by Will Carnforth and Ben Fry.

Barry Lowenhoff of Lowenhoff Design designed the website branding and original website. Peter Warwick and Malcolm Knight of Thames Alive have been closely involved throughout.